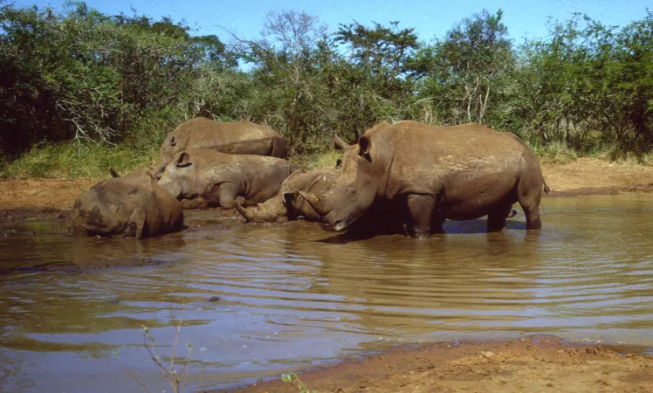 Conservationists have successfully moved 16 endangered black rhinos to the tiny—but “ideal”—African country of Eswatini, after removing them last year from a poaching hotspot in South Africa.

The 16 rhinos include mature breeding bulls and cows, plus some juveniles and calves, according to a statement issued by Big Game Parks, Eswatini’s national wildlife authority. The rhinos were collected in 2018 from a private game ranch in South Africa and finally released to a national park in Eswatini, formerly called Swaziland, on July 9 and 10.

“Many delays were experienced with this translocation, especially with respect to the bureaucratic nightmare of issuance and re-issuance of permits and ensuring that these animals were moved in the best manner and at an optimal time to minimize unnecessary stress,” noted the Big Game Parks statement.

The wildlife authority said it was becoming too expensive to protect the rhinos from poachers, “both in the private and public sectors, leaving many rhinos at risk.” Rhino custodians had no choice but to “disinvest” in rhino conservation in the affected South African region.

According to the IUCN Red List, there are only about 5,000 black rhinos left in the world, of which 80 percent live in South Africa.

Eswatini is one of the smallest countries in Africa, and it’s located between South Africa and Mozambique. The national park to which the rhinos were relocated was assessed as being an “ideal” black rhino habitat by the International Union for Conservation of Nature’s African Rhino Specialist Group. What’s more, only three rhinos have been poached in Eswatini in the past quarter century, whereas 8,000 rhinos have been poached in Africa over the past 26 years, according to statistics provided by Big Games Parks.

“After more than 10 years of searching for a suitable group of Black rhinos for this introduction, last week’s relocation marks the end of the first phase of this project,” said Ted Reilly, chief executive of Big Game Parks, in the statement. “With all 16 rhinos safely captured in South Africa, transported over 700 km [435 miles] across an international border, dehorned and safely released into a prime habitat, the second and most arduous phase of monitoring and security has just begun!”

The rhinos’ horns are removed as a deterrent to the poachers who would kill the animals in order to sell the horns. The rhinos are being guarded and closely monitored to ensure they’re finding sources of water and that they’re settling into their new home.

Conservationists can breathe a modest sigh of relief, but only time will tell if the relocation is successful. Last year, 10 out of 11 rhinos were killed during a failed translocation effort. The rhinos were being transported between parks in Kenya when they drank deadly saltwater.