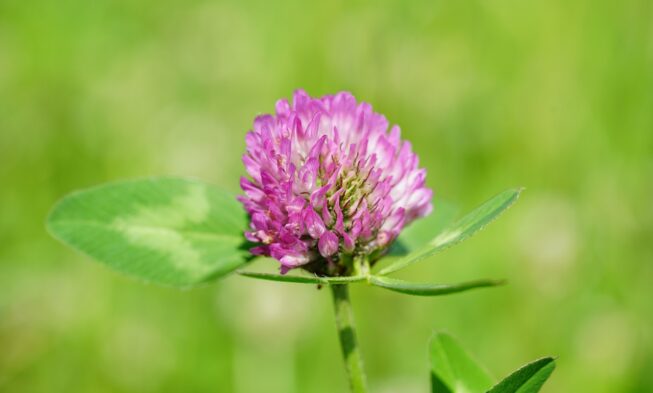 The clovers have leaves with tree lobed, small fruit which contains two seeds, and white, pink, yellow or red globular flower heads that bees are interested in. one of the secondary products of clover cultivation is clover honey.

Most types of clover tolerate the shade, walked traffic, and repeated mowing. the clovers are commonly used to the livestock of animal feed, due to their chemical properties. Clovers contain a high component of protein, phosphorus, and calcium. about 300 species of clover were identified in a wide world.

Alsike clover is also called Swedish clover that is firstly introduced at the beginning of the nineteenth century. and can be found in the British. the flowers are pink to white that turn to brown when mature.

This type of clover has slight stems which typically smooth, hairless, and reach about 30 to 90 cm or 1 to 3 feet in height, and three-lobed green leaflet.

Alsike clover grows in the wet soil, however, it tolerates the drought and strong acid soil that in the lower pH 5.1. this legume suites to the mixture with other grass to forage.

Another name of white clover, dutch clover is abundant clover found in the meadow and pastures. inflorescences are globular flower heads with 20 to 100 of white or pink florets.

The leaves are long trifoliolate which typically on the one stem. Seeds of white clover are yellow to reddish which are small and heart-shaped.

White clover is the most widely planted clover, that grows in the temperate zone, however, it also tolerates the drought or poorly water soil.

Subterranean clove is commonly cultivated in dry hill land of western Oregon and northern California when the summer, and planted in the south USA for the spring forage.

This type of clover is frequently used for spring and summer forage that in mixture with grass. the inflorescence is head of three to four white florets and the leaves are heart-shaped and trifoliate.

Strawberry cover is known as a low growing legume that fresh or in mixture with grass for pasture, hay, and silage. This type of clover has spherical inflorescence which typically heads of small white to pink flowers and large globular elongated and trifoliate leaves.

This type of clover is widely cultivated in Califonia, central Oklahoma, and north-central texas. rose clover is a high quality legume that appropriates for hay, grazing, silage, and also vineyard cover crop.

It has flowers which typically dense spike of many purple florets, and pale green trifoliate leaves.

Red clover is a short-lived perennial herbaceous legume known as most widely sown In many temperate areas. This type of clover is usually utilized for hay and silage by mixture with other grass, pastures, pollen, and nectar source that especially for the bumblebees.

The inflorescence of red clover is a spherical head of 20 to 100 white to pink florets and the leaves are the oval elongated shape and trifoliate.

Red clover is generally planted in the humid region of north America. It requires about 25 to 40 inches or 625 to 1000 mm of irrigation system. This legume thrives well in the high moisture and infertile soil, however, it tolerates the strong acidity soil.

Persian clover is divided into two subspecies, included majus and resupinatum. Majus is generally cultivated alone or in mixture with ryegrass or oats in the areas where provide irrigated system, while resupinatum is planted in the high elevation areas.

Persian clover is usually sown in the autumn that used for livestock during the spring. it tolerates mild salinity and waterlogged.

Known as long-lived legume which also called caucasian clover. Commonly used for grazing and forage. Kura clover has solid and hairy stems, inflorescence which typically the head of large pink become pink to purple in mature, the leaves are soft, hairless, and trifoliate.

This type of clover tolerates on the poorly drained and fertile soil, long spring flooding, and strong acidity soil.

Gland clover is origin to Turkey and Asia that commonly mixed with other grass to the long term for forage, short term ropping rotation. this type of clover is an annual legume that reaches 20 inches or 50 cm.

The inflorescence is dense spikes of 30 to 50 pinkish-white flowers which turn to pinkish mauve when mature. the leaves is smooth, hairless, and trifoliate. it tolerates to the light frost and strong acidity.

Crimson clover is known as the winter annual plant which commonly used to the livestock of spring. The flowers are scarlet which dense spikes of reddish, while the leaves are downy and oval trifoliate.

Crimson clover is generally planted in several areas, including Kentucky Southward and texas to the Atlantic coast. It naturally thrives well in the specific soil which is drained, fertile, and loamy. However, it also tolerates high acidity soil.

Balansa clover is generally planted for grazing, silage, forage, and green manure crop. It grows in the Mediterranean climate, however, it tolerates the cold condition about -40 Of or -26 Oc and strong acid to alkali that range pH 5.0 to 8.6.

Balansa clover has flowers which typically globular with a lot of white to pinkish florets, and trifoliate leaves. the range color of its seeds is yellow to red-brown and black.

Arrowleaf clover is an annual legume of the winter which appropriates for grazing, improving soil, and forage. The flowers are large conical heads with pinkish to white that turning becomes brown when mature.

This type of clover has leaves that typically arrow trifoliate palmate shaped.

Arrowleaf clover is planted in the Midsouth and the southeastern United States. It grows in moist soil and does not tolerate the drought or poor water soil. However, it survives on the range pH of 5.6 to 8.4.