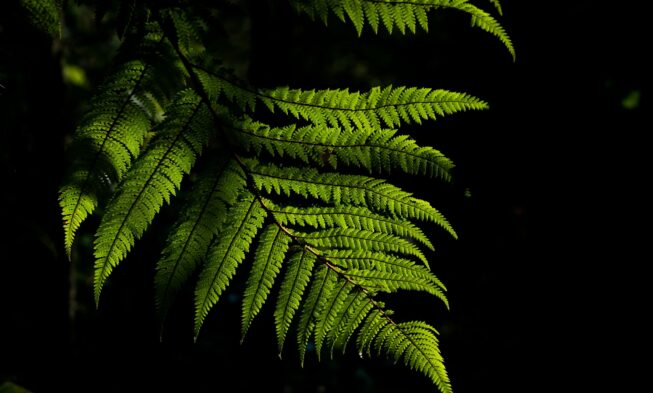 Fern or Polypodiopsida, are belong to a group of vascular plants. This plant has no flower and seed but possesses spores to reproduce. Ferns have complete leaves, roots, and stems. The number of species of ferns is spread out of the world. About more than 10500 types of ferns are known but perhaps thousand species are as slightly studied. Ferns are reputed as an old vascular plant which nearly older than the Carboniferous period.

Fern also called Tracheophytes because of its vascular system to circulates the food to the leaves. Their habit, form and reproductive way of each type of ferns are diverse. Some of them inhabit the damp, warm, dry, and cold area. Few of them twine and others float on the surface of a backwater.

Most families of fern occur in the tropics area. Other families inhibit both tropics and temperate areas, such as Athyrium, Cystopteris, Dryopteris, and Polystichum. Several tropical families of ferns are Marattiaceae, Gleicheniaceae, Schizaeaceae, Cyatheaceae, Blechnaceae, and Davilliaceae.

This vascular plant posses diverse form ad unique in appearance. They can be planted in the greenhouse or another place that set as close to its native habitat. The numbers of ferns are extremely easy to find in part of the world.

Bird’s net fern (Asplenium nidus) is naturally twining on the crooks or the trees. This fern occurs in the warm climates and grows maximally during the summer and spring. Bird’s nest fern ideally inhibit where indirect light area. The native areas of bird’s net fern are east tropical Africa and tropical area.

Staghorn fern (Platycerium) is common can be found growing on the surface of trees. They inhibit both tropical and temperate areas of the world were included in Australia, Africa, Southeast Asia, And the USA. Staghorn fern thrives in the bright areas in which indirect sunlight such as under the trees.

Holly fern (Cyrtomium falcatum), is also called Japanese holly fern. The mature reach the height of about two to three feet. It can be survived on winters but not tolerate the highest level of cold. Japanese holly fern is growing well on the ideal areas, including drained soil, pH of soil about 4.0 to 7.0, and the soil rich of nutrients. This fern thrives in a bright area, indirect light of the sun.

Boston fern (Nephrolepis exaltata bostoniensis), also known as sword fern is a tropical plant which can be mature about 4 length and 6 inches of broad. Planting this fern is not too hard, you need to set them on the ideal place as its native area. This class of fern requires fertilized soil which drained well, high humidity. Place them in the place where got indirect sunlight.

Cinnamon fern (Osmunda cinnamomea). This type got a unique appearance than others. It called cinnamon because of its colored fronds such as cinnamon. Growing this fern is quietly easy. It does not require a certain soil and can thrive on all types of soil. Cinnamon fern can be planted outdoor because it prefers direct light.

Australia tree fern seems like a palm tree at glance. This fern type assumed mature up to 15 feet in length. It requires moist soil and sensitive to drought. You need to watering continue to keep it alive. Australia tree fern naturally inhibits in the shaded place where to get indirect sunlight.

Japanese painted fern or Athyrium niponicum has different appearance color than another type of ferns. This fern has a combination color of silver and green on its fronds and dark red color on its stems. Japanese painted fern thrives in the cold temperature under – 30 F which requires well-drained and rich nutrient soil. This type of fern grows up to 2 feet in height and 2 feet on width.

Based on its name, you might think that relate to one of the vegetables. Both of asparagus as vegetable and asparagus fern are extremely different. You have to pay attention to this plant because of its irritation effect to the skin. This fern is not food, however planting on the garden as ornamental plants. Asparagus fern inhibits on the bright space which indirect sunlight. This fern has a number of science names, included Asparagus densiflorus, Aparagus plumosus, Asparagus aerhiopicus, and Asparagus virgatus.

Cloverleaf, its leaves appear in different shapes than the usual fern. Each leaf seems like it has four leaves which related. This type of fern generally found in any place including under rocks, and wild grow around the garden.

As its name suggests, crocodile fern or Microsorium musifolium “crocodilus” has the unique shape of dark green veins of its leave somewhat similar to the back skin of a crocodile. Even if the leaves are larger than other types of ferns. Crocodile fern thrives on the warning temperature, and alive to cold. Placing this plant in the warm areas is suggested to support it to stand alive.

The botanical name of this fern is Psilotum nudum. Whisk fern belongs to the primitive fern. It has leafless and lacks roots. The photosynthesis process mostly occurs in its aerial stems. This fern generally is epiphytes plants that inhibit on the surface of other plants. It can be found in several native areas of the world including Tropical Africa, South America, Tropical Asia, North America, Hawaii, New Zealand, Japan, Spain, and Australia.

Royal fern or Osmunda regialis appears to seem like a usual fern. This type mostly thrives close to the rivers and bogs which has acidic soil. The native areas of Royal fern are Asia, Europe, and Africa. People such as the Korean royal consumed royal fern as a dish called namul and gosari. this plant survives of full sunlight while in moist soil. it can grow high about 2-5 feet and up to 3 feet in width.

The botanical name of licorice fern is Polypodium glycyrrhiza. This fern is one of edible fern which commonly used to food and medicine. It called licorice because of its subterranean fronds taste close to licorice. This plant mostly inhibits on the surface of rock or woods. Licorice Fern should be placed in a cold zone when planted.

The name inspired by the red color on its young fronds which only appears in the spring and it will be mature when the summer begins. Autumn fern requires a full shaded area and mostly thrives in the cold zone.

As its name suggests, silver fern (Cyathea dealbata) posses silver color under its leaves. It mostly found in New Zealand where exactly in the sub-canopy forest. This fern is edible which some people take as medicine.

Even though the name of this fern Chinese, but Chinese is not its native area. Chinese ladder brake or Pteris vittata can be found in Tropical Africa, a number of parts of Asia, Australia, and Southern Europe.

As its name, giant fern or called Angiopteris evecta on the science name has large fronds. they can reach about 30 feet or 9 m. The giant fern thrives in the moist soil and warm temperature. the native areas of this fern are Indonesia, Malay peninsula, Australia, and Polynesia.

Java fern, known as Microsorum Pteropus is an aquatic plant. It is commonly used as the background of the aquarium, however it a good source of biofilm and alga for fish food. This fern is easy to care for. It survives in the water, low light and nutrient. Java fern mostly thrives on the rocks or roots of the trees. There are several varieties of java ferns, each variety has a different shape, included trident, lance, and needle.

This type is one of the primitive ferns while several other types are extinct. Ancient fern posses small leaves which known as Microphyl. Photosynthesis and circulation of nutrients occur inside of it stems.

Horsetail fern belongs to the family of Equisetum. This fern is the last species of the Equisetum family which still exists. As its name suggests, horsetail fern is a poisonous plant while consumed by horses in great quantities.

Eagle fern (Pteridium aquilinium),also called as broken and Eastern Brackernfern. This fern is an of adaptable fern. It is easy to grow in several areas, included in England. The common part of its structures is the triangular stems. Eagle is also edible that usually consumed as a dish food in Korean.

This fern is called ostrich because of its fronds which appear similar to the tail of ostrich. This fern thrives in the shaded place where get indirect light. Ostrich fern commonly planted in the garden around the flowers such as roses, and sunflowers. It can reach a height about 4-6 feet and width even more than 5 feet. this plant requires moist soil and shaded area.