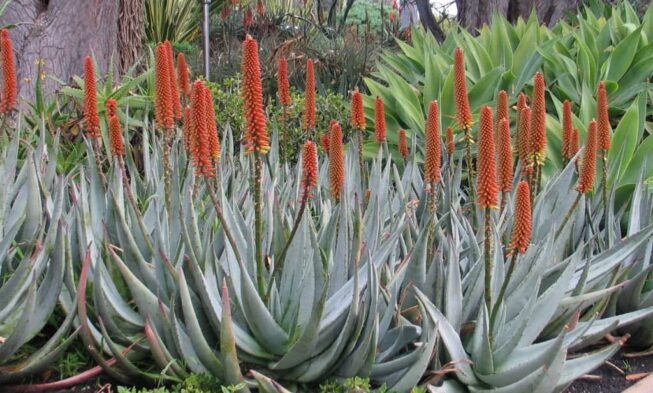 If we talk about the different types of aloe plants, aloe vera might be the first words coming in your mind. some people are often considered that aloe plant is aloe vera.

Aloe plants are the succulent tropical plants with a rosette of thick tapering leaves and bell-shaped or tubular flowers on long stems. Most aloe plants live in the tropical areas, however, parts of them relatively inhabit in the temperate.

They require shade to full of sun and tolerate the drought because their leaves are capable to store much water. Aloe plants are popular houseplants that easy to plant and producing fresh air around the environment.

Aloe maculate or soap aloe is also called aloe Saponaria. The name of this aloe, soap aloe comes from its ability to produce a soapy froth when crushed in the water.

The plant has green elongated with thick tapering leaves, red to orange flowers, and poisonous seeds. Soap aloe tolerates the salt soil, however, it is sensitive to the low temperatures under 32 degrees F.

Aloe marlothii has succulent leaves with a taper to the point and red to brown colored spines on the edges. The plant grows about 5 feet in length. The flowers are red to orange tubular on the branched long stem. Aloe marlothii effective to moisturize the skin and commonly used to cosmetic products.

Aloe sriata is different from most aloe plant that is stemless and toothless leaves. This plant has a large flat with thick tapering leaves and a red line along the edges.

It is also called coral aloe because of a pink tinge on the surface of its green leaves. The flowers are orange raceme that blooms at the end of spring to the beginning of winter. The research says that aloe sriata has health benefits to help digestion.

As the name suggests, fan aloe is an aloe plant with a fan-like of blue-green flat elongated leaves and orange-colored along the edges. This plant has a pinkish flower of each branch on a long stem. The flower is a source of nectar that naturally attracts birds and insects.

Aloe ciliaris is also called climbing aloe due to its fast-growing ability. This plant has thick tapering and curved leaves with soft white hairs on the edges and bright orange flowers which usually blooms in November and April. Aloe ciliaris is easy to plant by cutting methods.

As the name implies, spiral aloe is a plant with a spiral of large elongated leaves and red flower cluster with each flower attached by short branches along the main stem. This plant is commonly applied for varying cosmetic products.

Aloe dichotoma is also known as a quiver tree has a tall stem with several branches outlook like a tree. This plant commonly use to landscape supporting the environment. People are considered that this type of oleo plant is very dangerous.

Aloe barberae grows into a tree reaching up to 50 feet in height. It has risen flowers with green points. This aloe plant commonly produces aloe x Hercules by crossing breed with aloe dichotoma. Based on the studies, aloe barberea is effective against harmful organisms.

Aloe humilis is a succulent plant with a triangular of narrow elongated with saw teeth. It has a red, yellow, and orange flower cluster attracted on the central long stem. This aloe used to gel products as sun protection for the skin.

Aloe petricola is also called stone aloe that has orange, yellow, and orange flowers. This aloe plant is among popular garden plants which is a great plant of encouragement for the environment.

Aloe vera is the most popular oleo plant which has a rosette of thick taper to the point leaves and saw teeth on the edges. Believed has the numbers of medical benefits, included for hairs, skin, food nutrients, and others.

Aloe argenticauda is origin to Namibia. It can be found in subtropical to tropical areas where exactly thrives in the dried shrub and rocky lands. Leaves are yellow to orange colored that creates a rosette.

Aloe ballii is cultivated in Mozambique and zimbabwe. This plant is a green short plant with long narrow leaves about 50 cm in length and the flower is red to orange color that in the length around 12 to 16 mm and 4 mm in width.

Aloe bakeri naturally live in the areas that about 0 to 500 meters above sea level. This plant grows reaches 10 to 20 cm in height and 40 cm in width. Aloe bakeri requires 2 to 3 times of liquid fertilizer during the grown period.

Aloe excels is small that usually planted in the backyard as an ornamental plant. This plant has single steam which about 6 cm in height, located in the lowermost of the plant. The leaves form a green small rosette, while the flowers are orange to red long cylindrical in the middle of the plant.

Aloe camperi generally grows up to 30 cm length with a diameter of about 60 cm. The leaves create a rosette and bloom only at the beginning of spring.

Sometimes people get mistaken between bitter aloe and excelsa aloe. Both of them appear the same at a glance, their flowers are actually different. Although both flowers are red raceme, however, each flower of bitter aloe is rather curved and shorter than excelsa aloe.

This plant is also called cape aloe or tap aloe that usually grows into a tree about 10 feet in height. The leaves are green elongated with a taper to the point that arranges a rosette and will turn into brown when dried.

Aloe ferox has a strong laxative obtained from its extract that effective against constipation, and the seed extract has high linoleic, stearic, and oleic fatty acids that generally applied for cosmetic products.

Aloe brevifolia is one of the aloe plants with a colorful rosette of pale green short leaves that will turn into the golden yellow when gets full sunlight. The flower is tubular orange that blooms at the end of spring.

This aloe is called aloe arborescens because this plant can grow into a tree that can reach more than 10 feet in height. This aloe is among popular gardening plants that have green leaves and reddish flowers.

Based on the studies, this aloe has medical benefits to humans, included as nutrient therapy, supporting the immune system, and others.

Aloe aculeata is native to southern Africa that it is also called red hot poker due to the red colored of its thick tapering leaves.

As the most aloe plant, aloe aculeate has the spines which resemble the canine tooth on its leaves. Aloe aculeata has orange to yellow flowers which bloom in August and October.

Aloe aristata is the coldest tolerant of all aloe plants. It can, however, aloe aristata is sensitive to a soggy condition in the winter that dropped the roots. This plant thrives in both warm and cool climates.

The leaves are green to yellow oval tapering to a point with soft hairs on the edges, and the flowers are yellow to the orange cluster attached to the center stem. Lace aloe has the medical benefits that the roots used to would healing.

Aloe Nobilis is al so-called golden tooth aloe because of its spikes on the edge leaves. The spikes look like the pointed tooth that red to yellow colored. The leaves of this plant are medium up to 10 inches that form a rosette.

The leaves are green with soft spikes on the edges. The spike appears like the pointed tooth that probably the name comes from. These plant shapes open up flowered as the most aloes. Aloe juvena is optimally planted in the warm to hot areas where get of partial or full sun.

This aloe plant will change the color into reddish to brown when it gets stressed or dropped. This condition will occur as a way to response to the drought or cold condition.

As the name implies, aloe cameronii or red alone has dark red elongated with thick tapering leaves which form a rosette. The level of red pigment occurring in the leaves exposed to sunlight and water. The flowers are red to orange that bloom at the end of fall.