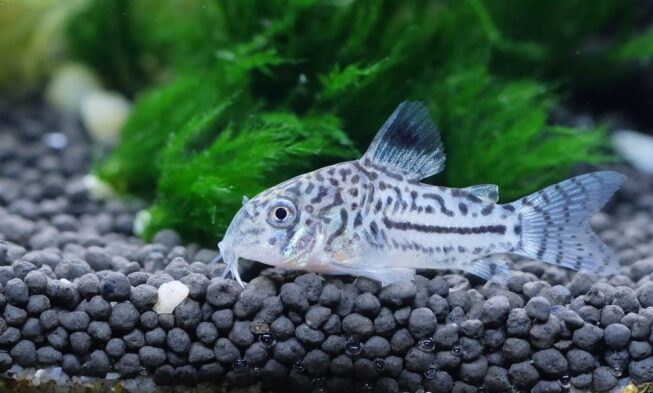 More than 3000 species of catfish are identified around the world but parts of them are still poorly known. Most catfish lives in the warm freshwater where their main habitats are fast-flowing rivers and lake.

Catfish also can be found in nearly all parts of the ocean in the wide world except Antarctica. This animal is the bottom fish feeder that generally feeding fish and algae.

Catfishes are described as an animal that has whiskers or usually called barbells. Most of the catfish have a scale on their skin but several none. The different bodies of catfish are depending on the species and the native zone.

Bristlenose pleco is native to South America where exactly in the swift water of the Amazon river and also can be found In the center of America.

This type included on one of the common aquarium catfish because of its ability to survive and unique appearance. It is sociable and has varied colors include gray, brown, and green with white or yellow spots on the skin.

Pictus catfish is one of the famous species of aquarium catfish because of its long barbells and silver with black spots on its skin, and also forked tail. This type commonly reaches 5 inches which about 2 or 3 in young, while 4 or 5 in mature.

Known as an aggressive species, this type is omnivorous which generally feeding the plant, bloodworms, insects, and fish. It is known as the bottom nocturnal feeder which is usually fed at the night.

As its name suggests, Striped Raphael catfish has white- striped on its body. It also has the barbells with a combination color of its skin between dark gray and white. This type of catfish is one of the large catfish which its size is over 20 centimeters and stay alive about 15 to 20 years.

The name of panda corydoras comes from its several black marks on the eyes and body likely panda. This type is small aquarium catfish which reach 1.5 inches in length. The diets of panda corydoras are sinking pellets, worms, meat, shrimp.

Otocinclus catfish is also called in many names includes dwarf sucker-mouth, dwarf Otto, Otto cats, and algae scrapers. This species is one of small aquarium catfish which reach about 1 or 2 inches in mature. It can be found in South America and the lowland through from northern Venezuela to Northern Argentina.

Also called the South American bumblebee catfish which is actually native of Venezuela. This type of catfish commonly inhabits the flowing rivers of the Amazon basin, Venezuela, Peru, and Colombia.

Bumblebee catfish is aquarium catfish that has a cute appearance with yellow-black striped and likely smile face. The body of this type is about 8 cm in length which alive about 3 to 5 years.

Another name of Chinese algae eater is sucker fish which comes from the type of its mouth that is a sucker. However, this type of catfish is also called lemon algae eater and Siamese algae eater.

The physical appearance of this species is a golden color with black spots on the scales, white color on the bellies, and the size is about 2 cm of length.

Wels catfish is one of the largest catfish which reaches about 5 meters in length and more than 300 kg in weight. It has several teeth in its mouth, long barbells upper the mouth, short barbells under the jaw and no scales.

The native area of this type is eastern Europe, which commonly found in the basins of the Caspian and Black seas. Wels catfish is a night vision because of tapetum lucidum in its eyes.

Also Read: The Different Types of Dolphins – Fact, and Information

Golden Nugget pleco is beautiful which the main color of its body is black with golden yellow dots on the whole body. The size of this type is about 6 to 9 inches and requires a large area or tank which about 55 gallons of water.

The diets of Golden Nugget Pleco are algae wafers, fresh veggies, and other algae which naturally grow in the freshwater.

The name of glass catfish come from its transparent body. And it is also called ghost catfish or phantom catfish. Almost all its body inside is appeared from outside.

This type of catfish has barbells between the mouths which naturally used to sensory of detecting the environment.

Based on its habits, glass catfish included in the schooling fish which prefers to live on the groups and will be stress staying alone. The native area of glass catfish in Thailand which is usually moving between the rivers and streams.


Glass catfish is a sensitive catfish. It will keep alive in the ideal zone were on the acidic water and temperate. Because of its unique body and survivor, might the reason of people commonly keep them in the aquarium.

The name of upside-down catfish comes from its appearance which the body likely upside down and also called blotched upside-down catfish because of the light brown color with black spots on its skin. This type of catfish generally reaches about 3 to 4 inches.

Corydoras catfish is a small fish that only reaches about 2 or 3 inches. The color is yellowish with cute barbell hanging on its mouth. This species is one of the common aquarium catfish species. It is easy to keep after and survive on very conditions of freshwater.

This type of catfish is also called armored catfish because its scale formed like the bond which appears on its body. This type is actually omnivores which feed on both plants and fish.

Flathead catfish are also called shovelhead cats, yellow cats, pied cat, and mudcat. This type of catfish has no scale on its skin. As its name suggests, the flathead catfish has a flat and broadhead which is similar to a shovel.

The diets of flathead catfish are generally worm, crayfish, and invertebrate. This catfish inhabits in the deep creeks.

Its science name is Ictalurus punctatus which is Latin means spotted. That name comes from its black spots on the skin. Channel catfish have forked tails that are similar to blue catfish has, and also vary color of the skin includes olive-brown or slate with hues of gray or blue on its sides and white or silver bellies.

Channel catfish inhabit lakes, rivers, reservoirs, and large streams, however, this type of catfish is mostly found in lakes or rivers of the USA. The natural diets are crawfish, baitfish, and worms.

The name of the blue catfish comes from the color of its skin, blue. This species is also called high fin, and humpback blue, while the science name of blue catfish is Ictalurus furcatus which Ictalurus is greek means catfish. Furcatus is Latin means forked which comes from its forked tails. The largest blue catfish whichever found reach about 300 to 350 pounds.

Blue catfish are commonly found in both the major and tributaries rivers where the native areas of blue catfish are Missouri river basins, Mississippi Ohio, Mexico, Texas, and Northern Guatemala.

This type of catfish required ideal conditions that moving around when the temperature of the water is not ideal. It commonly moves to the warm zone during the winter and when the summer begins, it moves to the top zone to find the cooler temperature.

Another beautiful catfish which is known in the world is queen Arabesque pleco. The unique design of its yellow lines on the skin with the dark main color makes them appear attractive.

The size of this aquarium catfish is more than 4 inches. Queen Arabesque pleco is a carnivore which generally feeding blood worms, brine shrimp, and Gammarus.