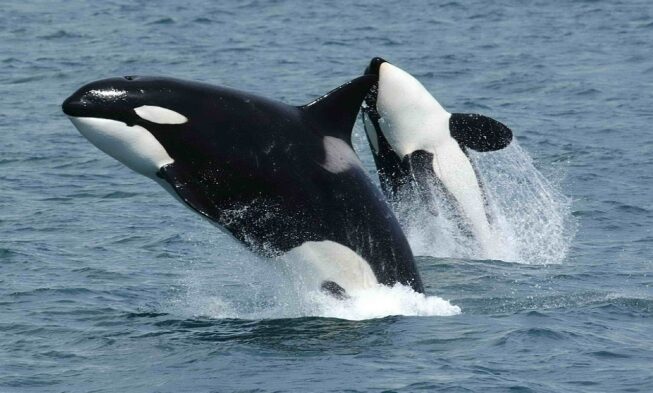 Nearly everybody has found several types of dolphins in anyplace, including the marine park, aquarium, and some time on an animal circus.

Dolphin is one of the favorite marine animals in the world due to its cute appearance and friendly. Dolphins are recognized as mammals living in the water. They continuously jump out of the water for breathing.

These marine animals inhabit the oceans, while several of them survive in the rivers well. Over 40 species of dolphins identified wide worlds, included pilot whale and killer whale.

Part of people might never consider that a pilot whale and a killer whale are a group of dolphin, however, Both of them are actually the family of dolphins.

This creature is gray and reaches about 3,5 meters or 11,5 feet in length. It generally inhabits the tropical and temperate zone of the sea. This marine animal is known as adaptable mammals that can survive on the small tank or small pool.

People recognize that this type of dolphin has higher intelligence than others. The bottlenose dolphin is Forced to do some instructions of humans to perform an interesting show at the marine parks or zoos. And also considered to be able to catch the calling signal of other species which even have not been met yet.

The common dolphin is generally used to call the long-beaked and the short-beaked. Both of them actually belong to different species. This type of dolphin generally lives in shallow and warm water where around the reefs. Put in appearance frequently on the sea which gives its name. this type of dolphin usually in large pods which about more than 100 individuals.

Ganges river dolphin, also called susu is one of the dolphin species that live in the freshwater with white to yellowish color. The length of the body approaches 2, 5 meters or 6, 2 feet. It mostly can be found in the active rivers of India and Pakistan where usually used to transport. This mammal lives on several dams of rivers.

This species is also known as aquatic panda due to its black and white color. The length of about 1,5 meters or 4,9 feet. Commerson’s dolphin is mostly found in the southern point of South America and in the small part area of the Indian ocean.

The appearance of the Rough-toothed dolphin is different because this species has no forehead. The length of this mammal is 2, 25 meters or 7, 4 feet. this type of dolphin is dark gray and white on its bellies.

The killer whale or orca is the predator that belongs to the dolphin family. This type of dolphins is a large marine animal with a horizontal tail fin and a blowhole on the top of the head for breathing. killer whale generally lives in small long pods.

As its name suggests, spinner dolphins capable of acrobats and spins out of the sea. Spinner dolphin generally jumps out about 10 feet or 3 meters and make multi spins after. This type inhabits the tropical, subtropical, and temperate zone of the sea where exactly in the Pacific Ocean, Atlantic Ocean, and Indian ocean.

Spinner dolphins generally live in a group which is called pods, about 200 individuals. The color of its skin is dark grey on the back and lighter on the bellies. It has also long breaks and varying patterns of shades.

As its name, Pacific white-sided dolphin is one of the popular dolphins which mostly found in cool and temperate of the Pacific Ocean. This type of dolphin is known as an active and inquisitive animal in which the skin is dark gray on the back and white bellies to the throat with a grayish pattern on the sides.

People consider that Pilot whale belongs to the species of whale, however, these marine mammals is part of the dolphin family. This marine mammal is the darkest grey which has no beak. The numbers of a pod are about 60 individuals and generally able to dive deep over 1900 feet or 600 meters.

Even though called spotted dolphin, but the spots patterns only appear in the mature while the young has no. The number of spotted pattern on this dolphin depends on the number of age.

Atlantic spotted dolphins usually can be found in the Atlantic ocean, they survive by the large group which commonly called pods. This type of dolphin is great on communication by its whistles and click.

This species is similar to bottlenose dolphin, however brighter and longer with slender beaks and dorsal fin. Humpback inhabits can be found among the Indian ocean.

As its name suggests, Australian snubfin dolphin is a small dolphin with brown colored which white on the bells, stubby fin and forehead. This type commonly lives in the shallow of the sea and can be found in Australia.